At Dublin Food Co-op we have the ability to do more than just buy our food. As members we have the right and the responsibility to make choices about who we support by who we choose to trade with.

As co-op members we have the power to make decisions and implement things we feel are the right thing to do, ethically and morally. One of these decisions our membership has taken was to boycott Israeli goods, until such a time as the state of Israel changes their stance on certain issues. This decision was taken at an SGM in 2010, and remains in place to this day. The following is a section of the minutes of that SGM:

A motion was brought to a Special General Meeting called by members in 2010.

Larry Gordon proposed the motion on the basis of the Co-op’s tradition for support human rights internationally. There was a vigorous debate, with some members calling for more time to discuss the motion. There wasn’t consensus on the day, but it was brought to vote and over 75% of members voted in favour of the proposal.

Motion calling for a boycott of all Israeli products at DFC’s premises
This boycott shall remain in force until such time as the state of Israel agrees:

None of these proposals were passed, and as of 2021, the current Dublin Food Co-op Purchasing Policy reflects the boycott agreed in 2010. Where relevant we make it clear to our suppliers that we do not wish to purchase goods from Israel. On occasion we will receive Israeli goods by accident, when a supplier sends them as a substitute when something we’ve ordered has become unavailable. In these cases they are returned whenever possible, or given away for free in the case of perishable goods.

In addition to boycotting Israeli goods, we actively support sustainable Palestinian suppliers where we can. We have a direct relationship with Zaytoun, a UK based social enterprise set up in 2004, with the goal of enabling Palestinian farmers to support themselves and their communities by providing a channel to sell what they grow.

In February of 2019 we hosted a talk with guest speakers Mohammed Ruzzi from the Palestine Fairtrade Association and Taysir Arbasi, Zaytoun’s Liaison and Advocacy Officer, as part of Fairtrade Fortnight 2020. They discussed Fairtrade farming in an occupied land and the work Zaytoun does to supply consumers with artisanal Palestinian produce.

We currently stock Zaytoun’s olive oil, almonds, za’atar, and freekeh and maftoul grains. In more recent times we have struggled to maintain our supply from them due to the impact of Brexit, but hope that this anomaly will be short term, and we continue to support Zaytoun as a supplier into the future. 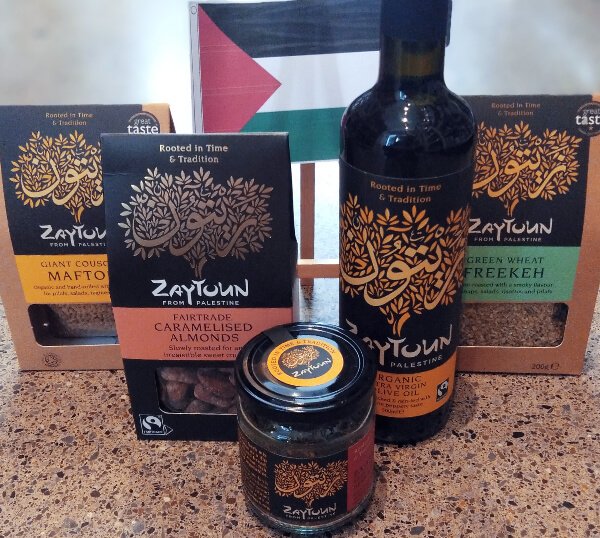 If you would like to support Zaytoun you can find a selection of their products at Dublin Food Co-op. They are available in our shop in Kilmainham or through our online shop.

‘Zaytoun is a Community Interest Company, a social enterprise founded to support Palestinian farmers through fair trade. 100% of our profits are reinvested into furthering this mission.

From peppery olive oil and fudgy Medjoul dates to sweet crunchy almonds, from zesty za’atar to smoky freekeh and nutty maftoul, we’re dedicated to bringing you the very best from Palestine’s fertile groves and fields.

We offer premium quality products that are ethically sourced, sustainably grown and sourced from farmers in Palestine. In doing so, we support Palestinian farming communities facing the challenges of illegal Israeli occupation and settlement through trade.

Reading back over articles written about Zaytoun in its early days, we are struck by how little has changed at the heart of the company. The mission that drove us then is the same as the one that drives us now – to support the livelihood of Palestinian producers via fair trade rather than aid.

We are still nourished by the energy, passion and commitment of people around the country who not only buy our products but organise events to host Palestinian producers, distribute Zaytoun products among their communities and offer financial investment to support our growth.

Our team has grown from our original four to nine people, each one bringing a unique mix of expertise, skills and dedication to support our mission. We are also grateful to be supported by board members who bring a wealth of commercial experience along with backgrounds in social enterprise, Fairtrade and Palestine solidarity.

We’ve won awards for our social enterprise, as well as for our products. We’re delighted at the recognition that Palestinian food has received – for its exceptional quality as well as for the ethics of the supply chains that work behind the scenes to bring each product to homes and shop shelves around the country.

And of course none of this would be possible without the incredible hard work, devotion and passion of the Palestinian producers with whom we work. They remain our inspiration, along with the people who have bought our products since we first set up and who continue to spread the word about our mission.’

You can read more about the farmers and suppliers Zaytoun works with, and see recipes for their produce on their website.

Another Palestinain enterprise you can support if you’re based in or visiting Cork is the award winning Izz Café. Run by Izz and Eman Alkarajeh, they established their business after arriving in Ireland, getting through direct provision, and starting up a stall at their local farmers market.

If you have other recommendations for Palestinian products or organisations you support please get in touch and share them with us. If you’d like to learn more about how we make decisions at Dublin Food Co-op you can read more about that here.

If you are not yet a member of Dublin Food Co-op and might be interesting in taking an active role in decision making and the direction of our co-op, you can read more about that here or join now.